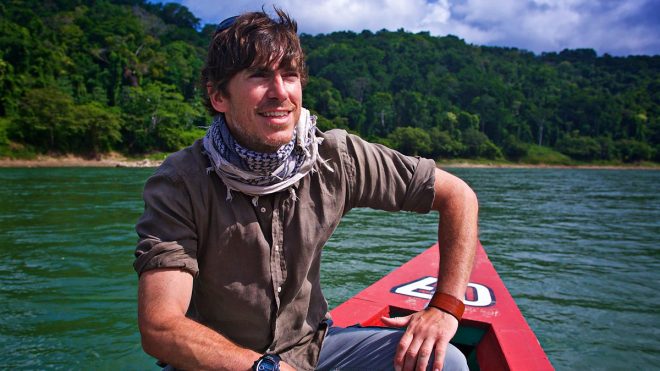 Whether you’re in full isolation or just practicing some sensible social distancing right now, you’re no doubt looking for ways to entertain yourself in the days and weeks ahead. While taking a trip, or even planning one, is off the cards right now, you can still get your travel fix from the comfort of your own loungeroom. Get some tips for your next holiday or simply enjoy what the world around you has to offer. In no particular order, here are the ten best travel shows you can binge on right now.

There’s no way we could make a list of the best travels shows without mentioning Parts Unknown. Hosted by chef and food writer Anthony Bourdain, there’s obviously a food focus to the show, but at its heart it’s about travel and exploration. From the markets of Dakar to LA’s Koreatown, he shines a light on the world’s unique eating and drinking culture. With Bourdain’s untimely death in 2018, which occurred while he was in France filming for the show, there is also a certain poignancy to these episodes. If you like Parts Unknown, be sure to check out Bourdain’s other series No Reservations and The Layover, which could just have easily topped this list.

If you’re drawn to travel for the feeling of freedom and adventure, this is the show for you. In 2004, actor Ewan McGregor and travel writer Charlie Boorman set out to travel from London to New York by motorcycle. This documentary series follows their epic four-month journey as they travel 31,000 km (19,000 miles) through 12 countries across Europe, Asia and North America. Along the way they deal with motorcycle breakdowns, accidents, treacherous weather, political unrest and of course, fatigue. They later followed the series with Long Way Down, in which they motorcycle from John O’Groats in Scotland down to Cape Town in South Africa, and the forthcoming Long Way Up, which will track their journey from Patagonia, Argentina to California in the US.

Word is that after working on other travel productions, creators Scott Wilson and Andre Dupuis felt that the shows weren’t expressing what they wanted from a travel program, so they decided to see if they could do a better job. And it turns out they could. Along with Justin Lukach, they created an award-winning program that saw them travel to 31 countries in search of unique adventures and experiences. Departures has been praised for its ‘real’ approach to travel, as well as the stunning cinematography.

Rick Steve’s is the undisputed veteran of the travel show. He’s been touring his way across TV screens since the early 1990s, but has been writing travel guides since the ‘70s. Steves has made Europe his speciality and spends a third of each year there researching for his books and filming his shows. With so much experience, you can be sure he knows the local secrets: the best places to eat, stay and play no matter which country you’re travelling to.

Coming from the creative minds of Ricky Gervais and Steven Merchant – the team behind The Office and Extras – you know this won’t be your average travel show. In fact, An Idiot Abroad is more like a prank show in a way, with the most reluctant of travelers Karl Pilkington enlisted to visit far flung places and attempt to live like a local. There are plenty of amazing locations and interesting cultures to see here, but let’s face it, the key attraction is Pilkington’s unique views on the world and the comedy value in his ranting and complaining.

Phillip Rosenthal first came to fame as the creator of Everybody Loves Raymond, but now he’s better known for appearing on the other side of the camera as a food and travel presenter. The key difference between Somebody Feed Phil and many other food/travel shows is that the host isn’t a chef or travel writer. In fact, he’s not much of an expert at all. While this could be seen as a negative, it’s actually refreshing to see someone delighted and surprised by the wonderful culinary delights the world has to offer.

This stunning documentary series has a slightly different take to the average travel show, with a focus on those behind the camera – following photographers and filmmakers around the world as they search for that perfect shot. What started as a short series supported by Canon cameras is now a partnership with National Geographic magazine with 12 episodes over three series. The result is a unique show with some seriously beautiful imagery.

Not exactly a travel show, but more of an opportunity to see some parts of the world that you would never otherwise get to experience. The eight-part series took four years to film, with footage from 50 different countries. Our Planet explores the vastly different landscapes that the world has to offer, from frozen frontiers to verdant jungles, deserts, forests and seas, all with their own unique flora and fauna. And like all the best documentaries, it’s narrated by the legendary David Attenborough.

While traditional tourism involves seeing a country or city in its best light, with visits to its famous attractions and most picturesque landscapes, there is another side to the industry, known as dark tourism. This is when people travel to sites connected with death and tragedy, such as Fukushima or Auschwitz. In this series, journalist David Farrier explores the notion of dark tourism with visits to murder locations and disaster zones, as well as exploring the culture around death by way of funeral rites or even voodoo.

For the last on the list we return to the lighter side of things. Here we have another rather reluctant traveler who has somehow ended up as the host of a travel show. Richard Aoede, known best as Moss from The IT Crowd, teams up with a different celebrity each episode for a weekend break in a famous city. With just 48 hours to see the sights, this isn’t much of an in-depth look at any destination, but you will get plenty of laughs along the way.